April 14) — An asteroid the size of a 25-story building will come within 18,000 miles of Earth on April 13, 2029 — closer than the communication satellites that orbit the planet, Discovery.com reported.

The asteroid, called Apophis, has only a 1 on in 45,000 chance of colliding with Earth. But it will then be back for another shot seven years after that.
What Are the Chances?

Apophis, an asteroid about the size of a 25-story building, will come closer to Earth in April 2029 than the communications satellites orbiting the planet. Apophis was discovered on June 19, 2004.
It’s hard for astronomers to determine what kind of threat Apophis poses in 2036 because its orbit will be bent by gravity during its 2029 flyby, Discovery reported.
During the 2029 visit, the asteroid is expected to be visible to the naked eye at night.

In comparison, the asteroid thought to have wiped out dinosaurs 50 million years ago was 6.2 miles in size. In more recent history, an asteroid that was about 50 meters, or 164 feet, exploded over Siberia, an unpopulated part of Russia, in 1908. It torched or blew down trees in an 800-square mile area, Discovery reported last year.
“As things get bigger, the amount of devastation goes up dramatically,” but so does the length of time between occurrences, Nick Kaiser, the lead scientist of a new University of Hawaii asteroid-hunting project, told Discovery.
A half-mile diameter object hitting Earth would be likely to cause a global catastrophe, Kaiser said. But events like that happen only every couple of million years.

NASA’s Chandra X-ray Observatory captured this image of what looks like a massive hand in space. The ghostly structure is the result of high-energy X-rays emanting from the nebula around the PSR B1509-58 pulsar — a small, dying star whose super fast spinning lights up its surroundings.
(Note: Please disable your pop-up blocker)
This object is predicted to come historically close, about a 1 in 800 year event, NASA said.
Scientists expect to know more detail about Apophis’ future orbits in 2013 and 2021, when the asteroid will come within 9 million miles of Earth. That will put it close enough for radar studies.
Below:
Red represents low-energy X-rays, the medium range is green, and the most energetic ones are colored blue. The blue hand-like structure was created by energy emanating from the nebula around they dying star PSR B1509-58. The red areas are from a neighboring gas cloud called RCW 89. Credit: NASA/CXC/SAO/P.Slane, et al. 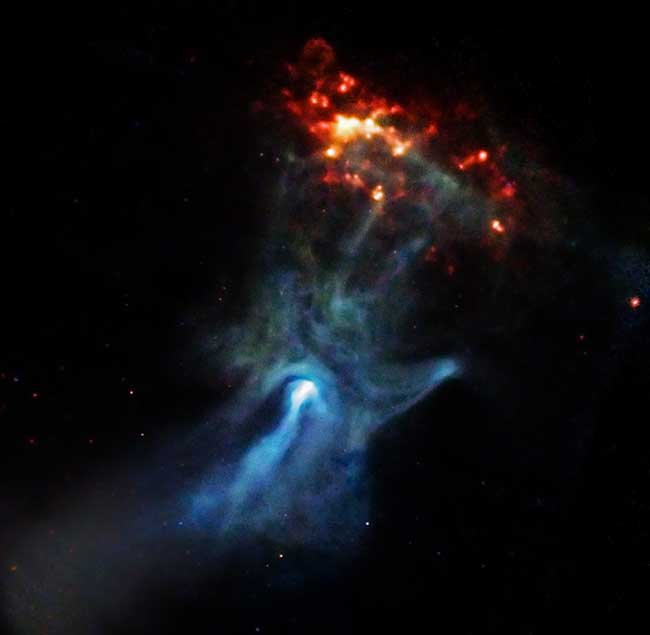