Joining Amerika Now during the first hour of the show is Emeritus Professor of Systematic Theology and Ethics at Pacific Lutheran Theological Seminary and the Graduate Theological Union in Berkeley, California, Ted Peters, who will be discussing his book, UFOs:  God’s Chariots?  Spirituality, Ancient Aliens, and Religious Yearnings in the Age of Extraterrestrials.

Is it time for a new “astrotheology” that investigates the facts and the significance of UFO phenomena as they relate to religion, human culture and science?

Ted Peters will present a unique analysis of the UFO phenomenon from the perspective of religion and spirituality, offering deep insight and new research into

how the UFO phenomenon may reveal what is culturally meaningful.  He’ll answer such questions as:  Are UFOs actually celestial saviors coming to save Earth from self-destruction?  Are UFOnauts advancing human evolution by birthing hybrid children?  Is it time for a new “astrotheology” that balances the facts and the significance of the UFO phenomenon with scientific studies at NASA and SETI?  Can UFOs be a source of transcendence, omniscience, perfection, and redemption?  And are the spiritual experiences of abductees a substitute for belief in God, or are they complementary to religion?

Ted will also present, for the first time, the results of The Peters ETI Religious Crisis Survey which tested the hypothesis that if contact occurs with an intelligent ET civilization, our historic religious traditions will face crisis and collapse.  Be sure to listen in to find out the surprising results!

Ted Peters is Emeritus Professor of Systematic Theology and Ethics at Pacific Lutheran Theological Seminary and the Graduate Theological Union in Berkeley, California.  He has a Ph.D. from the University of Chicago; a M.Div. from Trinity Lutheran Seminary in Columbus, Ohio, and a B.A. from Michigan State University.

An investigator of UFOs for more than four decades, Peters served previously as the Louisiana State Director of the Mutual UFO Network.  He co-edits the journal, Theology and Science at the Center for Theology and the Natural Sciences, and he has authored and edited more than two dozen books on theology as related to faith and science.

Joining the show during the second hour is author and Founder of the Enabling Enterprise Project, Akosua Dardaine Edwards, who will be discussing her project as well as her new book, What Did I Learn Today?  Lessons on the Journey to Unconditional Self-Love (Balboa Press).

According to the National Association of Women Business Owners, one in five firms earning more than one million dollars is owned by a woman.  Author and Founder of the Enabling Enterprise Project, Akosua Dardaine Edwards combats this statistic every day.  Her project aims to partner Caribbean and international women’s business support agencies, policymakers, and women entrepreneurs from all over the world for the enhancement, empowerment, exchange of ideas, and experience and best practice of women’s enterprise and entrepreneurship worldwide. 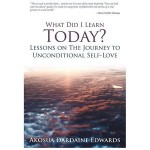 Dardaine Edwards hopes to change that statistic not only through her project, but also by sharing her own life story.  She’ll share her journey from being a scared and self-conscious child to becoming a mature, confident and successful woman, achieving her highest self and potential.  With brutal honesty, she will reveal the hard truths she had to learn, as well as the choices (good and bad) she’s made in her professional and personal life.

“Self-love transforms your life and kick starts the healing process,” says Dardaine Edwards.  “Anyone can transform his/her life through unconditional self-love, and it starts with you!”

Akosua Dardaine Edwards is the Founder of the Enabling Enterprise Project.  She has worked with women and young entrepreneurs throughout many countries, including Uganda, Tanzania, India and her native Trinidad and Tobago.  Her work has been featured in The Next Woman magazine and Katalyst Business Magazine Jamaica.

Joining Amerika Now during the final hour is the Co-Founder and Director of the Spiritual Arts Institute, Dimitri Moraitis, who will be discussing his and co-author Barbara Y. Martin’s latest book, Communing with the Divine:  A Clairvoyant’s Guide to Angels, Archangels, and the Spiritual Hierarchy.

Have you longed to work closely with angels, archangels, and other divine beings who guide you in day-to-day living and help you achieve your destiny?  Moraitis will help you learn how to strengthen your intuitive powers and hear what the divine is telling you as well as share accounts of encounters with celestial beings.

Communing with the Divine is a practical training manual and an inspirational guide, featuring illustrations of celestial beings and their auric

composition.  Tonight Dimitri will share how you can discover the various types of angels, including joy guides, teaching angels, and guardian angels; techniques to call on Michael, Uriel, Gabriel, Raphael, and other archangels; ways in which leaders of the spiritual hierarchy influence your life; the nature of evil and the importance of spiritual protection; keys to psychic and spiritual visions and clairvoyance; and meditation tools to access celestial realms, including meditative prayers that call on Divine Light and celestial beings for wisdom, love, prosperity, healing, peace, guidance, inspiration, and much more.

Dimitri Moraitis is Co-Founder and Executive Director of the Spiritual Arts Institute.  Drawing on 30 years of metaphysical experience, and personally trained by Barbara, he is an accomplished metaphysical teacher and healer.  Originally trained in film/TV, Dimitri redirected his life’s work early to pursue the path of metaphysics.  He’s lectured across the country and has appeared on both radio (including Coast to Coast AM with George Noory) and TV (AM Northwest and ABC’s Exploring Psychic Phenomena).  Together with Barbara Martin, he teaches the workshops and classes offered at the Institute.

Other books by Dimitri Moraitis and Barbara Y. Martin include Karma and Reincarnation, the critically-acclaimed The Healing Power of Your Aura, and the international bestseller, Change Your Aura, Change Your Life.