Biggest Solar Storm In Years Bombarding Earth: The biggest solar storm in 5 years is bombarding our planet right now, and may cause disruptions to satellites, power grids and communications networks over the next 24 hours, space weather experts say.

Two strong solar flares erupted from the surface of the sun late Tuesday (March 6), blasting a wave of plasma and charged particles toward Earth. After speeding through space at 4 million mph, this eruption of material — called a coronal mass ejection (CME) — should be hitting Earth now. The storm is expected to create strong disruptions due to a combination of intense magnetic, radio and radiation emissions, making it the strongest  solar storm since December 2006, even though the flare that triggered it was not the largest. The CME will likely trigger geomagnetic and solar radiation storms today, which could interfere with satellites in space and power grids on the ground. Aircraft that fly over the Earth’s polar caps may potentially experience communications issues as well, and some commercial airliners have already taken precautionary steps. The effects of this solar storm will likely last for 24 hours, and may possibly linger into Friday.

Scientists Point to Moon as Possible Cause of Sinking of Titanic: A century after the Titanic disaster, scientists have found an unexpected culprit of the crash: the moon.  Everyone knows that the cause of the ocean liner’s accident 100 years ago next month was that it hit an iceberg.  “But the lunar connection may explain how an unusually large number of icebergs got into the path of the Titanic,” said Donald Olson, a Texas State University physicist whose team of forensic astronomers examined the moon’s role.  Researchers have always puzzled over Captain Edward Smith‘s seeming disregard of warnings that icebergs were in the area where the ship was sailing.

So how was it that such a large number of icebergs had floated so far south that they were in the shipping lanes well south of Newfoundland that night?  The team investigated speculation by the late oceanographer Fergus Wood that an unusually close approach by the moon in January 1912 may have produced such high tides that far more icebergs than usual managed to separate from Greenland, and floated into shipping lanes that had been moved south that spring because of reports of icebergs.

Olson said a “once-in-many-lifetimes” event occurred on January 4, 1912, when the moon and sun lined up in such a way that their gravitational pulls enhanced each other. At the same time, the moon’s closest approach to earth that January was the closest in 1,400 years, and the point of closest approach occurred within six minutes of the full moon. On top of that, the Earth’s closest approach to the sun in a year had happened just the previous day. “This configuration maximized the moon’s tide-raising forces on the Earth’s oceans,” Olsen said.

The team’s research may have vindicated Captain Smith – albeit a century too late – by showing that he had a good excuse to react so casually to a report of ice in the ship’s path.  “In astronomical terms, the odds of all these variables lining up in just the way they did was, well, astronomical,” he said.

Giant Tubular Roll Cloud Reported Over Sea Near Brazil: A photo taken near Brazil captures a rare and beautiful “roll cloud,” a tubular cloud that seems to tumble across the sky.  Roll clouds are a type of arcus cloud, which is a category of low cloud formations. Their more common cousin is the shelf cloud, often seen on the leading edges of thunderstorms.  Winds from the storm “roll” the cloud parallel to the horizon, creating an effect that looks much like a horizontal tornado. 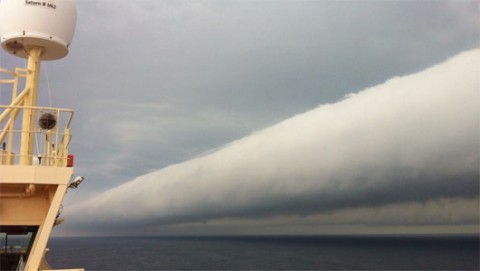