(1) John J. Higgins and Barb Adams – A Silent State Department, Quieter Kellyann, and  a Not So Quiet War on the Media…

Secretary of State Rex Tillerson debuted on the international stage last week and reportedly said “…less than 50 words in response to press questions” (http://www.cnn.com/2017/02/21/politics/state-department-tillerson-press-silence).  And according to CBS (http://www.cbsnews.com/news/today-in-trump-february-22-2017), Tillerson “…has yet to hold a news conference, and many of his meetings and calls are not publicly disclosed. That is a change from past practice, and it means foreign governments are often describing American policy, rather than the U.S. itself. For instance, just this week, details of Tillerson’s phone call Tuesday with the foreign minister of Russia – Sergey Lavrov – were posted on Twitter by Moscow, but not read out by the State Department.”  Which country does he represent?

Meanwhile, Kellyann Conway has gone oddly quiet. Maybe it’s related to her series of snafus including a massacre that never occurred (#bowlinggreenmassacre), a plug for Ivanka that turned into an ethics issue, and her statements about Trump having “full confidence in Flynn” mere hours before Trump let Flynn go. Or maybe it’s because her alt-facts just aren’t cutting it with the media or mainstream Americans. Can you say “do not book list?” Whatever the reason, silence is golden in this case!

UPDATE (Friday): In an affront to the free press, the White House barred reporters from several major news organizations on Friday. Journalists from CNN, The New York Times, The Los Angeles Times, Politico, BuzzFeed, and the BBC were blocked from participating in the informal press briefing with White House Press Secretary Sean Spicer.

JOIN Barb and John as they discuss A Silent State Department,  Quieter Kellyann, and a Not So Quiet War on the Media…

Joining the show during the second hour is author and learning specialist Renee Mollan-Masters. Renee will be discussing her newly-released book, The Friendship Pod Affair.

Set in the Middle East, Renee’s latest book brings up many of today’s most pressing issues. The characters in her book experience a  devastating tragedy and decide that the violence they experienced must stop by making the courageous, conscious choice that it stops with them. 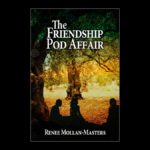 But deciding to make changes in your life are one thing and acting upon them is something completely different. Think about your own life? What is it that you want to change? What habits do you want to stop? What choices are you making that are holding you back from the life you desire?

Renee will discuss how you can achieve your “no more” and what steps you can take that will put real commitment to your stopping those behaviors.

Renee Mollan-Masters holds a Master’s in Speech Pathology from California State University, Fullerton. She has always been gifted at applying research and was acknowledged for such when she was awarded the Outstanding Senior Clinician award. Renee worked for 10 years as a speech pathologist in the Fountain Valley School District and in her own private practice.  While teaching a college success class at Orange Coast College in Southern California, she developed the You Are Smarter Than You Think Program, which eventually led to her internationally renowned book, You Are Smarter Than You Think, the teaching program, and online Journey.