It’s the annual Halloween Spooktacular on Amerika Now and joining the show for the first two hours are ghost hunters Deanna Gloyd and Shari DeOllos (co-founders) of Rocky Mountain Research and Investigation in the Paranormal, or R2IP!  They will be discussing their new book, Stories and Adventures of the Dearly Departed, as well as sharing some hair-raising tales and some EVP clips of some of the “dearly departed” that they have encountered in their investigations.

Deanna’s work and 9 years of experience spans many styles and genres of energy work and spiritual awareness.  She currently facilitates an energetic healing modality called Spiritual Response Technique (SRT) that incorporates researching and clearing the Akashic records by working with the High Self and Spirit.  “Everything is energy,” Deanna explains, and “It is a matter of identifying what energetic vibration is disrupting the harmonious alignment of the mind, body, or soul’s system and then releasing that energy.” 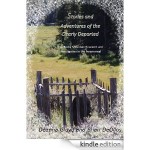 Deanna and Shari will reveal fascinating information about spiritual beings and talk about their personal interactions as ghost hunters.  They will discuss the tools they use to help both the living and the dead to find peace.  It’s a “behind the scenes” look into both ghost hunting and the ghost hunters themselves; how they got their start in the paranormal business and the adventures they share.

For more information about Deanna and Shari, visit their website at r2ip.com.

Joining Amerika Now for the second half of the show is Dr. Andrew Nichols, a psychologist, parapsychologist, and investigator of alleged poltergeist cases and other paranormal phenomena.  He is a member of the American Psychological Association, the Parapsychological Association, and the Society for Psychological Hypnosis.  Dr. Nichols has been a psychology professor for many years and is adjunct faculty in parapsychology at Santa Fe College in Gainesville, FL.  Nichols is listed in “Who’s Who in American Teachers.”

Professor Nichols has presented lectures and workshops on paranormal topics throughout the US, Canada, and Europe.  He is the author of Ghost Detective:  Adventures of a Parapsychologist, and his work has been featured in many books, including his latest essay Haunted Houses: Theaters of the Mind which appears in the newly released book, Ghosts, Spirits, & Hauntings.

As a media consultant on paranormal topics, Nichols has appeared on numerous TV and radio programs in the US, Canada, Europe, and Japan including Unsolved Mysteries; 48 Hours; Inside America’s Courts; and was a recurring guest on NBC’s The Other Side. Several television specials have featured Dr. Nichols’ work, including ABC’s The World’s Scariest Ghosts, The Discovery Channel’s Real Ghostbusters and Ghost Detectives, and Beyond Death on A&E.

Andrew has investigated alleged poltergeist disturbances for government agencies and law enforcement, including The United States Army, Oak Ridge National Laboratory, and the Daytona Beach Police Department.  In 1999 he was co-recipient of a grant to study haunting and poltergeist cases, the first grant of its kind in the history of psychic research.

For more information about Dr. Nichols and his work, please visit his website at  http://www.parapsychologylab.com/.

Halloween is not just for kids anymore!  And Lesley Pratt Bannatyne, whose newly released book, Halloween Nation, proves it.  Lesley spent 2 years of investigative work traveling across the country, visiting and talking with fanatics and fang makers, professional haunters, registered mediums, psychologists, and Halloween enthusiasts (ranging from NPR’s Garrison Keillor to Incubus guitarist Mike Einziger and The Simpsons’ “Treehouse of Horror” writer Mike Reiss) to find out what the increasingly popular holiday means to people and how they celebrate it.

In the course of her research, Bannatyne attended a seance of Houdini, a Samhain ritual gathering, a World Zombie Day event, and the Haunted Attraction National Tradeshow and Convention.  Diving right into the heart of how fear turned into a form of entertainment, Lesley asked hard-hitting questions about Halloween.

Lesley Pratt Bannatyne has spent more than 20 years researching Halloween celebrations and has written four previous books on the subject.  She has appeared on The History Channel’s Haunted History of Halloween and The Real Story of Halloween as well as specials on Nickelodeon.  She resides in Somerville, Massachusetts, where for 2 years she held the Guinness World Record for the largest Halloween gathering.

For more information about Lesley, please visit her website at http://www.iskullhalloween.com.