We’re less than a week away from Christmas and in spite of it now being 46 days since the election and the Electoral College confirming Joe Biden’s presidential election win, Trump still has not formally conceded and is continuing his false claims of election fraud while wringing every last cent out of his supporters as they contribute millions of dollars into the coffers of his dead-end re-election scheme. And whether or not Trump is being self-serving or actually drank his own Kool-Aid and believes what he tells his supporters about beating Biden and having the election stolen, his post-election windfall is certainly incentive enough for him to keep up the charade.

While the money donated to Team Trump was supposedly to help fight the massive election “fraud” Trump claims, only a small fraction of it has gone to “legal” challenges. Most of the money has gone to paying off Trump’s campaign debt and into his shell LLC to help fund whatever Trump decides to do after leaving office (or more likely, is escorted and forced out of office, as he continues to state he’s not leaving the White House). Donald J. Trump needs all you true believers to keep opening your wallets to help him keep the grift going well into 2021.

But grift is only one part of the immense damage Trump has done. Trump has sowed dysfunction and distrust everywhere, and his rhetoric and viewpoint about a “deep state” have made our own government the enemy of the people. The wounds he has inflicted on this country’s democratic process and in the perceived legitimacy of Biden’s soon-to-be presidency are not going to be easily forgotten or healed.

Recent polls show that a majority of Republicans still do not believe the election was fair. And with the support and propaganda of right-wing media and far-right conspiracy theorists who continue to give credence to Trump’s far-flung BS, a dangerous cycle has emerged. The more Trump keeps up the lies and riles up his supporters, the more money they throw at him; and the more money they throw at him, the more incentive Trump has to keep the vicious lies and conspiracy theories going—inflicting more damage and polarization while successfully changing the core tenets of the Republican Party for the worse–where conspiracy theories are trafficked for successful personal and political gain.

At a time when the number of Covid-19 deaths and hospitalizations in the U.S. are breaking records and Americans are continuing to file for unemployment and are being evicted from their homes, Trump is spending his time pushing false claims of voter fraud while focusing on a list of potential pardons, turning a blind eye on the major hack of the U.S. Government by Russian operatives, and lashing out at any Republicans who dare to acknowledge Biden’s Electoral College victory, including Mitch McConnell, who urged fellow senators to let the election results stand…finally.

It is dangerous to embrace false and baseless attacks on our election and this country’s institutions and it is treacherous that the Republican Party and the Senate have become platforms for discredited conspiracy theories. If a deep state is a group of individuals who wield government power for personal gain without accountability or transparency, then Trump and his Republican cronies and loyalists fit the definition “To a T!”

The election is over. Joe Biden will be the 46th president of the United States. But the biggest question remains. Will Republicans give up their addiction to Trump and the “win now at any cost” mentality and embrace democratic norms, allowing Trump’s body politic to fade away, or will they continue down the path of their own inexorable decline and, in so doing, risk destroying this nation and democracy in the process?

JOIN Barb and John as they discuss Game Over?

Darren Gold is one of the world’s leading executive coaches and advisors to CEOs and leadership teams of many of the most well-known organizations. Tonight he discusses his empowering book, Master Your Code: The Art, Wisdom, and Science of Leading an Extraordinary Life.

Are your beliefs hijacking your life? As human beings, we’re born with roughly 20,000 genes that fill every cell in our body. This genetic code makes us who we are and guides our behavior. From the time we take our first breath, we’re genetically hardwired to react, avoid risks, and stay safe…Or so we think!

But what if this is a myth? What if we can erase and replace our internal programming and master our own code? 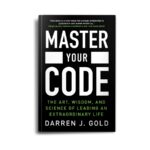 In his book, Master Your Code: The Art, Wisdom, and Science of Leading an Extraordinary Life, Darren Gold presents a groundbreaking guide for rewriting your program and mastering your code in every aspect of your life, including your career, health, relationships, and even your financial success.

Gold will discuss why some leaders are more effective than others; why some people have fulfilling marriages while others don’t; why some elite athletes become professionals while others remain amateurs; and why some of us are happy while others are unhappy despite almost identical circumstances.

Darren Gold is a Managing Partner at The Trium Group, where he advises and coaches CEOs and leadership teams at many of the world’s most innovative companies, including Roche, Dropbox, Lululemon, Sephora, Cisco, eBay, Activision, and Warner Bros.