(1) OPEN DISCUSSION on The Hoodwinking of America

The American Dream…we’re told it’s alive and well and that everyone has an opportunity to achieve the “Dream” as long as they play by the rules. But many Americans don’t understand that the rules of the game are rigged…with the only real winners being those who make the rules and their shills who are active participants in the scam.

Time and time again political candidates promise to make America great again or that you can have everything right now, “It’s all yours,” if you elect them. And time and time again the majority of Americans end up with the short end of the stick. Unfortunately, with big money being poured into campaigns, thanks in large part to Citizens United, the game isn’t likely to change. Candidates and elected officials don’t need to rely on the will of the people to get elected or re-elected.

But hoodwinking isn’t limited to politics. Americans have been misled, misinformed, and lied to for decades at all levels in most sectors by an establishment that has its own self-serving agenda. By keeping the public divided and shifting the focus away from what’s really going on, the ruling class is able to main control.

JOIN Barb and John as they discuss Wall Street and the banking scandals; Bernie Madoff; corporate welfare, greed and corruption; healthcare and Big Pharma; food “safety;” the importance of the 2016 election; and the world of professional fraud–The Hoodwinking of America.

Joining the show during the second hour is trial attorney and author, Helen David Chaitman. Helen will be discussing her and co-author Lance Gotthoffer’s book, JP Madoff: The Unholy Alliance Between America’s Biggest Bank and America’s Biggest Crook.

Bernie Madoff stole $64.8 billion dollars from thousands of people, but many of the people responsible for monitoring his account allowed him to get away with it by looking the other way for years. How could this happen?

Trial attorney Helen David Chaitman lays out what happened exactly and how Bernie got away with it. Chaitman herself lost it all

when Madoff’s Ponzi scheme collapsed, and has since made it her life’s mission to bring everyone responsible to justice. She’ll discuss what the bankers knew, when they knew it, and the many times they had a chance to notify others about Madoff’s suspicious behavior. She’ll also talk about how they did nothing, helping Madoff steal billions…yet not a single banker has gone to jail or lost their job.

Chaitman will also detail the conversations she had directly with Madoff via phone from jail, where he told her how he got away with it. She’ll discuss why the government entered into a deferred prosecution agreement with JP Morgan Chase, allowing them to keep billions in illegal profits.

Listen in and discover why we should all be very, very angry at how it all turned out!

Helen Davis Chaitman and Lance Gotthoffer are experienced trial lawyers with extensive experience in litigation involving financial institutions. Partners at Chaitman LLP in New York City, they represent over 1,600 former Madoff customers who lost billions of dollars. Chaitman was tipped off to JPMorgan Chase’s complicity by Bernie Madoff himself, with whom she and Lance Gotthoffer have had numerous telephone conversations over the last five years.

Chaitman is the author of The Law of Lender Liability, along with numerous articles on various legal topics. She has a genetic commitment to making the world a better place and is determined to educate the public about the extent to which JPMorgan Chase has become a criminalized institution. 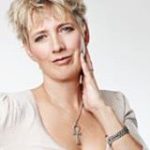 Author and Modern Love coach Pouline Middleton joins the show during the third hour to discuss her book, One Woman, Three Men: A Novel About Modern Love and Sex.

Is there anything new to be said about love, sex, and marriage? YES, there is. A new novel, based on the true story of a truly modern woman, Pouline Middleton, proposes that it is time for a new model of dating for women — One Woman Three Men.Following a divorce and then a relationship with a cheating man, Pouline Middleton decided that trying to get all a woman’s needs fulfilled by a single man may no longer make sense in today’s world. What she needed and many other modern women may need to find are three men: one for conversation, one for sex, and a handyman to do work around the house.“Women are bombarded with stereotypes about love and a woman’s

role in it,” says Middleton. “The popular models of romance today for women are so limiting. There’s the Florence Nightingale housewife model or the Lady Macbeth executive woman model. In either case, the woman isn’t getting all she needs to be independent, intellectually challenged and respected, as well as loved and cherished. So why not separate out your needs, and find three different men, one for each need?”

Given that infidelity is rampant and that 40% of first marriages end in divorce, Middleton’s ideas are striking a chord in so many women who are struggling with love. “I’m not against marriage, but the fact is, most of the time, things go wrong because people have too many expectations of each other and their expectations are not very concrete. With this three-men model, everybody delivers only what they want to and agree to, and it’s a win-win situation,” says Middleton. When she first published the book in Denmark, it became a bestseller and Middleton was interviewed on every major radio and TV show.

Listen in as Pouline describes this radical new approach to modern love and romance…for women, men, and even married couples!

Pouline Middleton has been a Modern Love coach since 2010. Danish by birth, she holds a M. Sc. in Economics and has worked extensively around the world. She worked for several companies in sales and marketing until she decided to become a coach.  Pouline actually lived with the three-men model for a period in her own life until she met “the one” in 2013 and is now happily married.