Hour 1:  OPEN DISCUSSION on How America Has Changed Since 9/11

Fourteen years ago, on September 11, 2001, life in America changed forever. Since that time, we’ve experienced more than a decade of foreign wars, deportations in the U.S. have nearly doubled, the surveillance state continues to increase at an alarming rate, traveling the “friendly skies” is no longer so friendly, and business “as usual” has taken on a different meaning, with a discernible rise in corporate rule.

America’s involvement in the War on Terror has resulted in changing attitudes about safety, resulting in policies such as the Patriot Act and the National Defense Authorization Act (NDAA), which prioritize national security and defense, often at the expense of our civil liberties.

Before 9/11 we could show up for a flight minutes, not hours, beforehand, and we didn’t have to remove our shoes or other items of clothing to get through airport security. Most Americans had never heard of the Taliban or al-Qaida, instead generally accepting  people regardless of their differences. Postal workers didn’t ask if you were shipping “anything hazardous,” and ordinary citizens’ phone and email communications weren’t routinely gathered and stored as part of a clandestine network of surveillance.

JOIN Barb and John as they discuss How America Has Changed Since 9/11.

Stick out your tongue! There’s a good reason for looking at the tongue when it comes to health. New York holistic dentist Dr. Victor Zeines says the way to a healthy body is by having a healthy tongue.

Dr. Victor Zeines has discovered that most practitioners and patients have an invaluable health tool at their disposal that has been mostly overlooked all these years—the human tongue.  A lot can be revealed about your state of health by an assessment of the tongue. Dr. Zeines’ groundbreaking book, Your Tongue Never Lies, is an introduction to this fascinating subject.

Although there are several books on tongue analysis available, Your Tongue Never Lies is unique because it is the first book written in 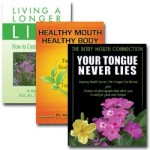 easy-to-understand terminology and geared to the general public. It emphasizes how the problems seen on the tongue may be related to digestion, and how with proper detoxification and supplementation, the body can be put back on the road to health. This change for the better can also be monitored simply by looking at the tongue. Furthermore, it educates readers on a simple eight-step treatment to reduce gum disease.

Dr. Zeines is the author of three books on living a longer, healthier life as well as creator of the Holistic Dental Formula, “Vital Boost.”  He has been practicing Holistic Dentistry for the past 25 years after receiving his degree from N.Y.C. College of Dentistry and completing an internship at the Eastman Dental Center in Rochester, New York.  In addition, Dr. Zeines is a contributing writer for Rodale’s The Herbal Drugstore and makes regular appearances on radio and television. Dr. Zeines is one of the contributors of the film Food Matters and is a member of the Advisory Board of TheHolisticOption.com.

Dr. Zeines uses a combination of homeopathy, kinesiology, nutrition and aromatic therapy along with bio-compatible materials in a gentle, relaxed atmosphere.  He uses non-surgical laser and nutritional techniques for treatment of periodontal problems. Dr. Zeines practices in Manhattan and Woodstock, New York.

Author Marilyn McKenna joins the show during the final hour to discuss her debut book, Eat Like It Matters:  How I Lost 120 Pounds and Found My Inner Badass (And How You Can Too!).

Marilyn is the wife of Rob McKenna, the former Attorney General of Washington state. She’s a real-life success story who understands the emotional obstacles that prevent

people from finding weight-loss success. Although not a formally trained doctor, Marilyn has learned how to cultivate her own inner strength through living by her own rules every day. Her rules have helped her run marathons, raise a family, and keep the weight off. Marilyn knows the secret to success is cultivating a healthy mind in order to achieve a healthy body.

Being a politician’s wife is all about appearances, and Marilyn was expected to be at her husband’s side through thick and thin. After decades of being morbidly obese, she chose thin–and started a weight-loss journey that would change her life.

From hitting rock bottom to finding a path to recovery, Marilyn will share her journey to health, discussing her lifetime battle with food, her attempt to be a perfect wife and mother, and the breaking point that forced her to ask herself hard questions.  She’ll reveal how she transformed her body and her life and will share strategies to help others who want to unleash their own hidden potential and change the trajectory of their health.

In 2007, Marilyn McKenna began her journey into weight loss and fitness.  Since then, she’s transformed herself into an athlete who runs marathons, competes in triathlons, practices yoga, and participates in a wide variety of athletic pursuits.  Marilyn received her bachelor’s and master’s degrees from the University of Washington, where she met Rob McKenna, to whom she has been married for more than 28 years. During her husband’s career as an elected official on the King County (Seattle) Council and as Washington State’s attorney general, Marilyn was a public political spouse who was hiding a very private pain. Now, she is a passionate advocate for wellness, committed to helping others who want to transform their lives and the lives of their families through healthy eating and physical activity. She and her husband currently reside in Bellevue, Washington. They have raised four children, who of course never eat anything that’s bad for them.
Contact Marilyn, read her blogs, check out more of her favorite recipes, and subscribe to her weekly newsletter at marilynmckenna.com.