Join Barb and John as they review and analyze some of the top stories of the week and try to figure out where things are heading in relation to the Russia investigation, Syria, Facebook and Zuckerberg, Ryan’s retirement, and everything else that happens between now and Saturday night when we air! 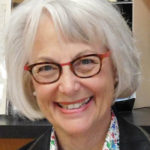 Joining the show during the second hour is former Yale and Columbia University Teachers College professor and clinical psychologist of 30-plus years, Roni Beth Tower. Roni will be discussing her book, Miracle at Midlife: A Transatlantic Romance.

Are you ready for a mid-life miracle? What does it take to make a huge mid-life change, and will you have the courage to trade your life in for a new one?

These questions are answered in a gripping memoir by an Ivy League-trained clinical psychologist who found herself making an enormous change in her life after turning 50.

Miracle at Midlife:  A Transatlantic Romance is a memoir chronicling the two-

year courtship between a divorced American attorney living on a converted barge in the center of Paris and an empty-nested clinical and research psychologist who works from her home in Connecticut.  Throughout their journey, they conquer challenges of internal demons (mostly hers) and external threats (mostly kids, careers, and culture) as they share adventures in their respective worlds.

“My story is less about the healing power of love than it is about the powerful forces of destiny, the way our lives push us toward lessons we need to learn to become the people we are meant to be,” says Roni Beth. “It is about the necessity of choice in the context of inevitability, the ways in which we create possibilities in our lives and then are free to decide how to respond to them.”

Roni Beth Tower earned her doctorate in clinical psychology from Yale and later cross-trained at Yale Medical School, studying closeness in married couples. A clinical psychologist of 30+ years, Roni Beth is a regular contributor to PsychologyToday.com. Her writings have appeared in Woman’s World, Huffington Post, and Psychology and Aging.  She’s been interviewed for articles appearing in Glamour, Cosmopolitan, Red Book, Family Circle, and Seventeen.  Her work has been featured in USA Today, Wall Street Journal, The National Post, and Reuters Health as well as being interviewed by numerous television and radio stations.  Now a retired psychotherapist and professor, she and her husband live in Tarrytown, New York, near their six grandchildren and airports that can regularly return them to Paris.