Joining Amerika Now during the first hour of the show is filmmaker Emmanuel Itier who will be discussing his film FEMME:  Women Healing the World.

There’s never been a better time to be a woman.  More and more women are stepping up into leadership roles, and the next so-called “revolution” will come from women.  The world needs healing, and men alone cannot heal the world…it will take a balance of women and men working together. 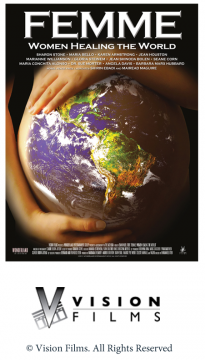 An experienced feature film producer, Emmanuel Itier directed the thriller Tell Me No Lies (2000) and the horror film Scarecrow (2002).  In 2012, Emmanuel completed the peace documentary, The Invocation, narrated by Sharon Stone, with Desmond Tutu, HH The Dalai Lama, Deepak Chopra, and many other worldwide peace activists.  Emmanuel also produced the films Wildflower (1999) and Scarecrow Slayers (2003) among other pictures.  He also acted as a co-producer and financing consultant on Johnny Mnemonic, Another 9 1/2 weeks, Shattered Image (1998), The Dentist (1996), and Progeny (1999).  In 2013, Mr. Itier executive-produced a drama filmed in Hong Kong called Red Passage, which will enter the Festival circuit in 2014. He also directed and co-wrote an action picture for The Asylum, ATTILA, with ultimate fighter star Cheik Kongo.  Emmanuel Itier has also been a successful music and film journalist for rock magazines, French TV networks, and the Internet for the last 25 years.  In addition, Itier has been a buyer for various French film distribution companies for the last 20 years. He was on the board of directors of the Santa Barbara Film Festival for a decade and he writes poetry. He is also very involved with charities and the political world. He grew up in France and moved to the U.S. 25 years ago. He resides in Santa Barbara, California, with his wife and two sons.

Finally, Emmanuel Itier’s film, FEMME, which was released in late 2013, earned numerous awards around the world.  Mr. Itier is now directing five documentaries  to keep “making Peace, One movie at a time.”  His new series is called The Universalis Collection: Documentaries for a Conscious Humanity.

Author and businessman-artist Donald Jordan joins the show during the second hour to talk about his latest book, Happy Lightning.

Will anyone remember your work after you’re gone?  Donald Jordan says many of us have everything we need to leave a lasting legacy–we just don’t realize it.  But we need to ask the question, “Is doing what you love more important than making enough money to feel financially secure?”

More than half (58%) the professionals in a recent LinkedIn survey said, “Yes,” but Donald Jordan believes far fewer are actually pursuing their passion.

“Many of us have a talent or a calling that we think would result in something far more consequential than the work we’re doing everyday,” says Jordan, the founder of a real-estate investment firm whose passion has always been to write.  “If we can’t find a way to pursue that passion, we’re restless, anxious, and worried that our life will never be fulfilled.”

emotional tug-of-war and the most important legacy everyone of us can leave.  “Having been called to write when I was 14, then becoming responsible for our family of four at 16 due to my father’s illness, I’ve experienced the tension between financial necessity and the pursuit of a dream,” says Jordan.  “It is a difficult combination, but unfortunately, many of us focus so much on that, we fail to grasp the significance of what we have right in front of us.”

Donald will talk about pursuing true passion as well as tips for trying to balance work life with the pursuit of dreams.

Donald Jordan is the founder and owner of a real estate investment firm and the author of two published novels and several published short stories.  At an early age, he founded a building construction company which grew into a multimillion dollar real estate development and investment firm. At age 21, he published his first novel.  Having experienced both want and wealth, Jordan strives in his writing to express a unique view of the values and shortfalls of money and the essential development of an attitude towards life which is not dependent on circumstances, prosperity, or success. Donald Jordan is married with two daughters.

In 1993, Donald received the Georgia Department of Natural Resource’s prestigious Forest Stewardship Award in recognition of his contributions to, and love for, nature.

Author Don Thayer joins the show during the final hour to discuss his new book, The U.S. Constitution:  Here Is What It Says.

Have you heard someone say recently, “This is what it really means” or “This was their intent” when discussing the U.S. Constitution?  Don Thayer has written a new book about the Constitution that will let you decide for yourself once and for all what “it” really says.

Don believes that it doesn’t take a constitutional scholar to understand the true meaning in our Constitution.  Although there is specific legal terminology in Article 1, Section 9, the majority of the U. S. Constitution is written in pretty simple language so anyone can understand it.

The Constitution is a written document, signed by the first state representatives and the legislatures of EVERY state that has joined the Union since that time. It is NOT a living, breathing document that automatically changes with the times, however, we can change the document any time we need to through the amendment process, as defined in Article 5.

The Constitution is a written document that means what it SAYS.  And neither federal, state, nor local laws overwrite it.

Nowhere does the Constitution say it can or should be interpreted according to the original intent of some of the founding fathers, nor does it say it should be interpreted according to an individual’s belief in implied meaning. Article 5 of the Constitution states that it requires two-thirds of both houses of Congress, or the legislatures of two-thirds of the states, to propose amendments, and those amendments must be ratified by the legislatures of three-quarters of the states to become law.

“The powers not delegated to the United States by the Constitution, nor prohibited by it to the States, are reserved to the States respectively, or to the people.”. Amendment 10 – ratified December 15, 1791

Read it for yourself and YOU decide what it really says.

Don Thayer grew up in northern Kentucky, served in the U.S. Marine Corps from 1984 to 1987, then lived in southern California for four years in his early twenties.  He then moved to Colorado in 1992, loved the mountains, and finally settled down for the first time after moving to the Steamboat Springs area in 2000.

Don became truly interested in politics in the early 2000s, and over time realized just how partisan politics are.  His book, The U.S. Constitution:  Here Is What It Says, is his first writing project, emphasizing the actual wording of the ultimate law of the land versus a personal opinion of its meaning.