Join Barb and John as they discuss the results of the election and where we as a nation go from here. Is it a time for healing or a time for action? And how do we move forward in a positive, unifying manner? 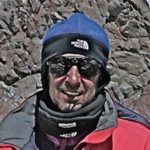 Joining the show during the second hour is author, political philosopher, and entrepreneur Robert Herzog. Robert will be discussing his novel, A World Between.

What if parts of the world just started disappearing?  How would that change the way we think about reality?

This is the premise of the new sci-fi novel, A World Between, by author and entrepreneur Robert M. Herzog, whose blend of

speculative fiction and science is mesmerizing readers around the world. In the book, huge chunks of the world begin disappearing, but at first no one really believes it. That is until the Secretary General of the United Nations takes notice, and commissions an official investigation to figure out what it might mean. Could it be the end of the world–or perhaps the start of a new one? Delving into quantum theory and fractal geometry, Herzog unravels a gripping plot while questioning the fabric of what it means to exist.

During the interview, Robert will discuss different ways of thinking about our reality; how quantum theory and other ideas helped him create the story; what it may mean if our own world started vanishing; and how technology and current science shape the future of our species.

Robert M. Herzog has had his stories and poems published in Solstice Literary Magazine, Toasted Cheese, Downstate Story Magazine, Straylight Literary Arts Magazine, and South Jersey Underground. A physics major until he read Nietzsche, Robert went on to blaze trails as a political philosopher and entrepreneur. For over 30 years, he has founded, built, and led businesses dealing with the major issues of our time, from energy to the environment to digital media and health care. A Brooklyn boy who has climbed Mt. Kilamanjaro, Robert remembers the taste of the first (and subsequent) wine he drank and continues to savor a life of adventure enriched by family, friends, and children.