The following article was written in response to the increased earthquake activity in the Midwest, including many parts of the New Madrid Seismic Zone.  Oklahoma, especially, has been hard hit and continues to shake, causing many to question whether the New Madrid Fault is re-awakening or if something else, like fracking, may be causing the heavy earthquake activity.

The 200th anniversary of the New Madrid earthquakes is only a few weeks away, and experts warn that we may be overdue for another large earthquake in that region. 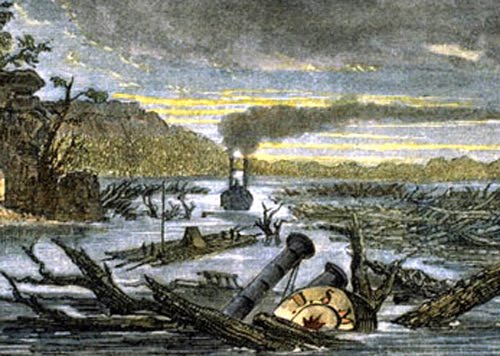 A depiction of the Mississipi River after the New Madrid earthquakes

On December 16, 1811, the first of several very powerful earthquakes occurred, a magnitude 7.7 in northeast Arkansas. Five weeks later, on January 23, 1812, a magnitude 7.5 quake struck the New Madrid, Missouri, area. Then, on February 7, 1812, a magnitude 7.7 unleashed its power along the Reelfoot Fault from New Madrid, Missouri, into Tennessee. Reports from eyewitnesses described the ground surface as being “in great convulsion with sand and water ejected tens of feet into the air” (liquefaction). Motion from that quake created waterfalls on the Mississippi River, causing the river to “run backwards” for several hours, and created Reelfoot Lake in Tennessee.

Additional strong quakes (magnitude 6.0 and above) also occurred between December 1811 and February 1812, and aftershocks continued for years.

The region most affected extended from Cairo, Illinois, to Memphis, Tennessee, but the quakes were also felt over the entire eastern U.S., including New York City, Boston, Washington, D.C., and Charleston, South Carolina. Damage was reported as far away as Charleston and Washington. President James Madison, in a letter to Thomas Jefferson dated February 7, 1812, makes mention of the earthquake.

According to the Central United States Earthquake Consortium, “The geology in the central U.S. is particularly vulnerable to earthquake shaking, and potential damage is more widespread than other earthquake-prone areas of the United States.” Although major earthquakes appear less frequently in this area of the country, when they do occur, damage is more widespread and felt much farther than in quakes associated along the western coast of the U.S., for example.

The New Madrid seismic zone lies directly above an ancient failed rift known as the Reelfoot Rift, which is considered to be mechanically weaker than the rest of North America. Geologic records reveal that the New Madrid Seismic Zone has repeatedly produced sequences of major earthquakes, including several of magnitude 7.0-8.0, over the past 4,500 years; while rocks in the rift area reveal a pattern of violent Midwestern earthquakes stretching back at least 15,000 years.

Predicting future quake activity in this region is difficult. According to Seth Stein, a geophysicist at Northwestern University in Evanston, Illinois, “One fault system might generate a cluster of quakes over a period of a few years, but then it delivers a diminishing set of aftershocks for centuries while stress migrates to a new fault system.” Perhaps that explains what is happening in Oklahoma, which some studies indicate sits squarely in the area of the country most susceptible to this type of seismic activity.

On November 5, 2011, Oklahoma experienced its strongest earthquake ever, a 5.6-magnitude quake. Oklahoma normally experiences about 50 earthquakes per year, but since mid-2009 the state has experienced ten times more earthquakes than normal. In 2010 there were 1,047 quakes, and 2011 continues to be “earth shaking.” Some blame fracking (see related article about fracking), but research indicates the quakes are too big for fracking to be the cause.

The New Madrid Fault averages about 150 quakes per year, with most being less than M3.0. According to the U.S. Geological Survey, the region can expect “a magnitude 6.0 quake every 100 years, and larger quakes, such as those experienced in 1811-1812, can be expected about every 500 years. However, there is a 10% chance of a ‘big one’ happening in any 50-year period, which means there is a 7-10% chance of a repeat of the 1811-1812 quakes anytime in the next 50 years, with a 25-40% probability of the quake being M6.0 or greater.” The Central United States Earthquake Consortium also warns that the probability for a moderate earthquake to occur in the NMSZ in the near future is “high.”

Considering this region is home to millions of people and includes the cities of St. Louis, Missouri, and Memphis, Tennessee, a major earthquake could result in widespread, catastrophic damage with large numbers of fatalities across numerous states.

In response, many states within the New Madrid Seismic Zone have been conducting earthquake preparedness drills. Just this week (November 15-17), southern Illinois conducted a 3-day earthquake drill. Three million people took part in an 11-state earthquake drill held in late April called the “Great Central U.S. Shakeout.” That drill was the largest of its kind in the region, and will be conducted again in February 2012.